Which means they love their sports, and they take their sports seriously.  Chaz Betz, who is a native of the area, knows this better than anyone as he celebrates the grand re-opening of his store in Crossgates Mall.

“I am excited (about the re-branding as a Pro Image Sports).  It has a fresh clean look now,” said Betz. 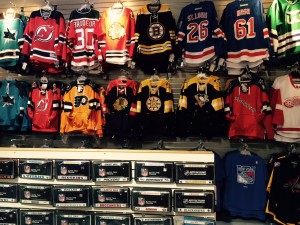 Betz has a broad assortment of jerseys from the NHL (pictured), NFL, NBA and MLB.

He has been a small business owner for many years, going from being a Burger King franchisee in the 90’s, to an independent sports store owner in the Crossgates Mall for the past 15 years.  Operating under a different name, and being a one-man show made business challenging for Betz.

For instance, he never had a permanent lease in Crossgates and has had to move spots within the mall 33 times in 15 years. (Malls typically give those tenants on a temporary lease a 30-day notice before they have to vacate the space.)

Betz said of his newly built, longterm store, “It has been a longtime coming.  I feel like I have more roots now.  I’m locked in and have a great brand.”

Betz is one of many established independent sports store owners that joined the Pro Image Sports family over the past few years.  Most often, they are initially interested in Pro Image Sports in hopes of acquiring a vendor they’ve been unable to obtain on their own.  Once they get in business with Pro Image Sports, they find out, like Betz has, that there is a lot more service offered by the franchisor than they ever imagined.

“Most people that have been doing it on their own are afraid of going with Pro Image Sports, because they’re afraid of feeling controlled,” said Betz.  “But Pro Image isn’t like that.  They want you to make money, and try to be helpful.  I can actually see the cash flow increase despite the royalty payment, because of being a part of Pro Image Sports.”

Check out Chaz’s new store at the Crossgates Mall, where his attention to detail with his customers is remarkable.  He is open to doing special orders when he can, and truly gone above and beyond the expected level of service. 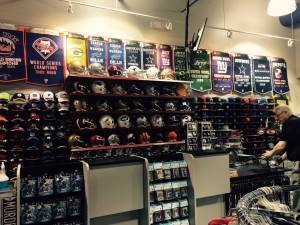 Betz has a wide variety of novelty items, but it is his vast array of full-sized replica helmets that he offers in all 32 teams is what has a lot of customers talking.