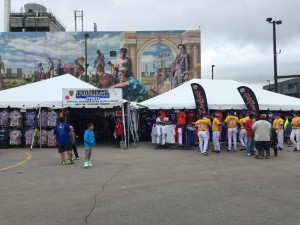 Reportedly, nearly 150,000 people flock to Omaha every June, many to support their favorite college participating, and many families there for Little League baseball tournaments held in conjunction with the CWS.

OMAHA, NE- Vanderbilt is getting used to booking hotels in Omaha during June, as they seek back-to-back College World Series titles in the upcoming finale against Virginia.  That’s something longtime Pro Image Sports franchisees Paul Shillingstad and Noel Cahoon can understand.  The two store owners in Nebraska -Cahoon’s store is actually in Omaha at Westroads Mall- wrapping up retail tents they’ve been doing in conjunction with the CWS every year for over a decade.

As the tournament draws to a close, the event that brings an estimated $50 million to the local economy.  Pro Image Sports has large tents selling officially licensed sports products, just like in our stores. 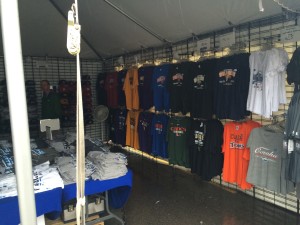 Of the many retailers that set up tents outside TD Ameritrade Park Omaha (Not exactly as iconic as Rosenblatt Stadium), Shillingstad may have the largest tent of them all, which is around 5,000 square feet.

While Cahoon’s tent isn’t the same size, both owners have performed well at the event over the years, and this year has been no different.  Their entrepreneurial spirit, capitalizing on sales opportunities outside the four walls of their stores, is a good display of the flexibility of Pro Image Sports franchises.  There are many opportunities for our owners to find creative ways to use different channels to boost retail sales, and are encouraged to do so, which franchisees appreciate.

The College World Series is a nice shot in the arm to sales during a time of year that typically represents a small amount of annual sales.  Rather than sitting back and waiting for sales to come to them, Shillingstad & Cahoon took to the streets, once again, to sell to those attending the College World Series. 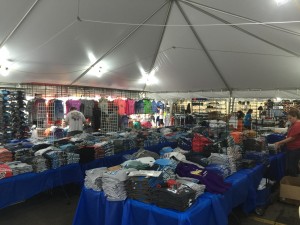 The size of Shillingstad’s tent is amazing to behold.