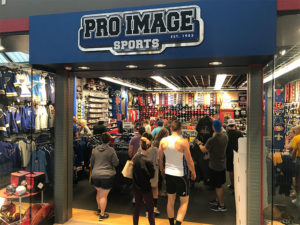 Jared Weiss was recently featured in this Southeastern Missourian article on the impact of the St. Louis Blues’ recent Stanley Cup victory.

“Jared Weiss, owner of Pro Image Sports in West Park Mall, said he’s selling Blues championship shirts and other Blues logo apparel as fast as the merchandise is shipped in.

“It’s been crazy, much better than expected,” he said.

On Friday afternoon, Weiss and his wife, Emily, were selling Blues championship shirts directly from shipping boxes on the floor of the store just minutes after they had been received.

“Up there, we sold out of Stanley Cup merchandise by 2 o’clock Thursday,” he said, adding in comparison to Pro Image Sports sales in other cities where teams have won the Stanley Cup in recent years, such as Chicago and Pittsburgh, “the St. Louis market has far exceeded other hockey markets.”

As for Blues sweaters with player names, Weiss said the most popular throughout the playoffs have been Blues center Ryan O’Reilly and rookie goaltender Jordan Binnington.”

Congrats to the Weiss family and the Blues on their recent successes!