LOS ANGELES, CA – Daisy Rivas has never been afraid of a challenge. In fact, she enjoys it. Fearlessness forged through years of hard work and determination, she and husband Eddie were equally yoked as partners in life and, eventually, business.

As a young Brooklyn couple –via Ecuador- they both worked full-time to pay their way through college before venturing down paths of different careers, he in sales, her in retail, with one goal in mind: to own their own business.

They made their dream a reality in 1997, when they finally found the opportunity they’d been searching for. After relocating their young family to Southern California, the Rivas’ opened their first Pro Image Sports store in the Ontario Mills shopping center.

Over the next 19 years, they developed seven of the strongest Pro Image Sports stores in the country. While raising a family, Daisy’s own career took off as Eddie grew their Pro Image Sports business, winning the Franchisee of the Year award twice. Daisy climbed the corporate ladder, becoming a VP with the largest eyewear manufacturer in the world, Luxottica. Knowing nothing different than hard working self-made parents, their three children were raised knowing the value of hard work and entrepreneurship.

Life wasn’t without it’s challenges, but continued to sail along as planned. Until one day it didn’t. Eddie was diagnosed with a terminal form of multiple-myeloma, a cancer of the plasma cells.

“It took some time for us as a family to come to terms with the diagnosis.”

Daisy left her job to begin working in the Pro Image Sports business with Eddie, just as they originally planned so many years before. Their time was limited, as Eddie tragically passed away in April 2015 at the age of 54. But before he did, he left Daisy with one final wish: to keep building their business.

“That was what I took as my mission,” said Daisy. “It was his passion. And to keep his passion alive, I knew nothing else, but to do that.”

Big decisions on the business demanded immediate action, including whether to sign a new lease for one of their stores. Daisy didn’t flinch, and one day after her husband passed, she signed a long-term lease.

Daisy threw herself into learning a new industry and worked frantically to juggle all areas of the business. What’s transpired since has been nothing short of amazing. Gross sales are up 22% over 2014.

“I’m in this mindset of I am woman hear me roar. I’m trying to take it and tackle it all on my own.” 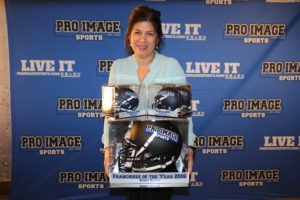 Daisy Rivas added to her trophy case this year, winning the Franchisee of the Year award for the second consecutive year.

Despite being one of two women who are sole proprietors of Pro Image Sports stores, Daisy never doubted her ability to operate their stores successfully. She gained tertiary sports knowledge over the years, as if by osmosis, from being married Eddie, who was an absolute sports freak, especially for his beloved Dallas Cowboys.

The two have different management styles, as could be imagined. Daisy is able to react to sales trends and make purchases without being influenced by the inner fan. She has revamped their merchandising; creating clearly defined women’s departments in all of her stores.

“We’re very much the minority in this industry. Does that deter me being driven or successful? No. Does it say because I’m a woman can I not get into this business because its male dominant? No. If you’re an individual that is driven, that is passionate, that wants to do it, you absolutely can do it.”

“I am fortunate I’ve had the career and experiences I’ve had and to be able to apply them and leverage them to have a business increase. Yes that is phenomenal but it is coming because my husband’s not here, which is bitter sweet.

On the final day of 2017, Daisy’s store at Lakewood Mall in —- pushed past $1 million dollars in sales, making it her fifth –yes, FIFTH- store to pass such a threshold for the year. It is the first time in Pro Image Sports history one owner has had that many million dollar stores. The previous record was three, set by Eddie.

Daisy says the focus now is enjoying the journey while taking business to the next level.

“Where I am today, where the business is today, obviously, is a tribute to what my husband and I started together. This is the starting of a new chapter.”