COLORADO SPRINGS, CO –  Colorado sports fans have the reputation of being some of the most loyal and devout in the country.  That passion spills over into their support of local sports fan stores.

Colorado Springs residents recently came out in droves for the grand opening of the new Pro Image Sports in Chapel Hills Mall.  The locals are ecstatic to have a sports store of this caliber open as they are gearing up for the new NFL season in which their own Denver Broncos are a favorite to return to the Super Bowl.  But their enthusiasm cannot eclipse that of local owner Frank Fabjancic, who has been downright giddy about his new store since it opened last month.

While this is Fabjancic’s first foray into the Pro Image Sports franchise, this new store has been over 15 years in the making.  Customers in Colorado Springs and Pueblo are familiar with Fabjancic as the owner of Sports Fanatic, a concept he has run as an independent store owner that began around the time Denver last won a Super Bowl.

After years of working full-time at the railroad, in addition to building his sports store business, Frank stepped away from his job and teamed with Pro Image Sports.  This way he could capitalize on the franchisor’s ability to help him expand his permanent store count and receive steeper vendor discounts, but mostly to have someone help him in whatever way possible to improve his operation for the first time in his career. 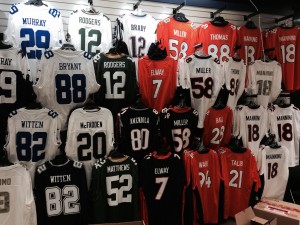 Football season is near, and Pro Image Sports is the headquarters for NFL apparel.

All Fabjancic’s work over the years to improve his business has culminated in this new store.

“I finally feel like I have built the greatest experience in a sports store that a customer can have,” said Frank.

This is just the beginning for Frank and his team, as they are rebranding two more Sports Fanatic locations at Citadel & Pueblo Malls as Pro Image Sports.