LAS VEGAS, NV- Franchise owners from across the country convene with corporate officials every year in conjunction with the Sports Licensed & Tailgate Show for the Pro Image Sports Convention.

This is an event everyone in the Pro Image Sports franchise family looks forward to. There’s a multitude of opportunities for them to capitalize on to improve their business moving forward. There could be even greater opportunities to have fun making lasting memories with friends and colleagues after working tirelessly throughout the year.

It is the one time during the year everyone gets together to fraternize with other franchisees, discuss the future of their business with corporate employees and visit with vendors are a few of the activities for franchisees to participate in.

Pro Image Sports has the hardest working business owners around. They work tirelessly throughout the year to ensure their stores service their customers wants and needs, so one of the most enjoyable activities of the convention is taking time out to recognize the admirable efforts and excellence of franchisees at the awards dinner.

For the first time in the 29-year history of Pro Image Sports, there were 2 Franchisee of the Year awards; one given to a single storeowner and the other awarded to a multi-store owner. 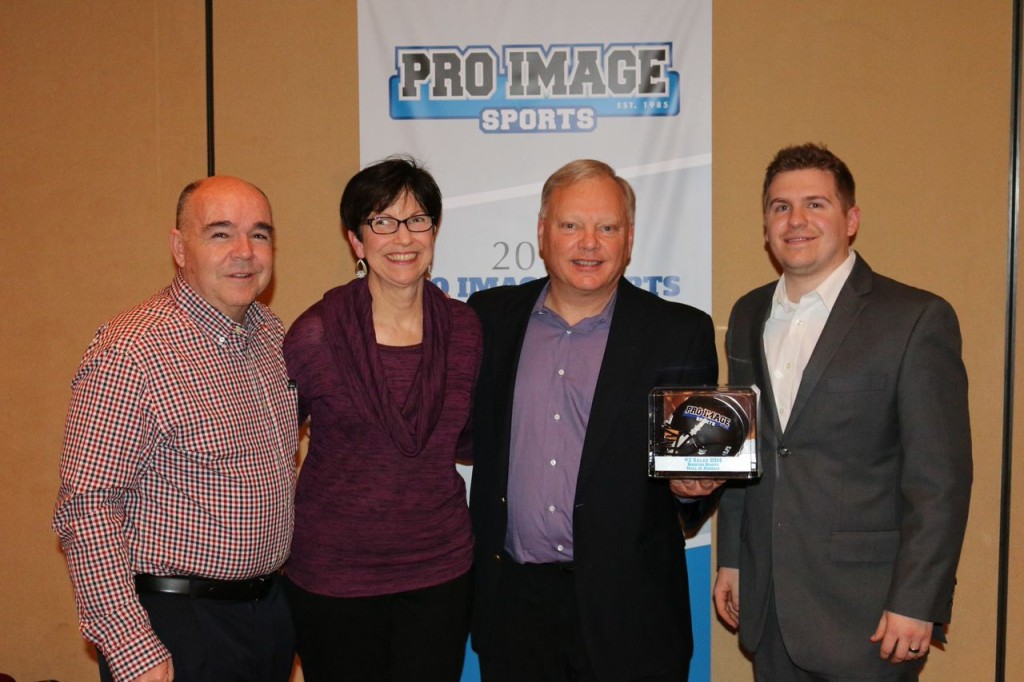 Tim and Anita Moulton have worked tirelessly for the better part of a decade seeking new ways to improve their business at Mall of America in Minneapolis. It may be one of the largest malls in the country- at times the foot traffic and tourism feels more like an amusement park than a shopping mall- but it also has a plethora of stores that offer sports licensed product.

Each year they are consistently in the Top 5 in gross sales in Pro Image Sports. In 2014, Moulton built a new store giving his longtime customers a fresh change, and new visitors a great experience finding new product.

The business of operating a sports fan store is ever changing, and as an owner you have to be consistently flowing in fresh sports fashions, product for emerging & established stars and novelty items that make being a fan fun. Moulton made a concerted effort to focus on diversifying his product mix and incorporated more novelty items into his store. Customers responded favorably to the changes almost immediately.

Moulton makes marketing his business through social media a priority and continues to find search for ways to improve his business. That tenacity and effectiveness are just two of the reasons Moulton was named the Pro Image Sports single store Franchisee of the Year. 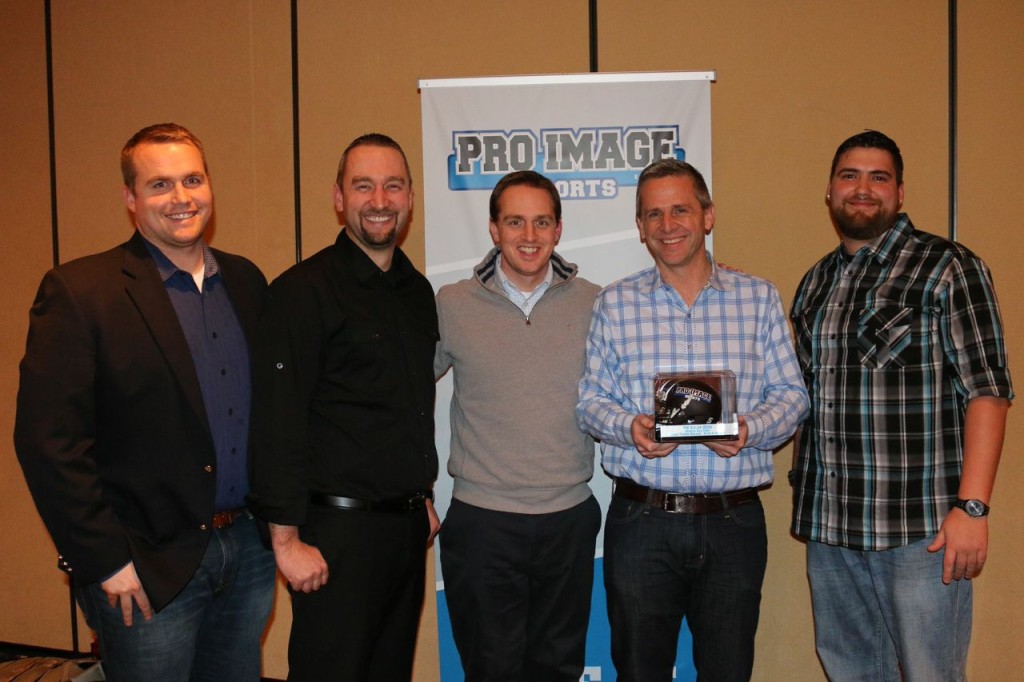 Travis Hawkes and his management team of Brandon Miner, Klay Frongner and Jeff Johnson from Boise, Idaho were recognized as the multi-store Pro Image Sports Franchisee of the Year. The Hawkes group is one of the longest standing owners in the Pro Image Sports system, and this marks the third time they have been recognized as FOY.

They are an organization that has a collection of stores that represent the flexibility of the Pro Image Sports concept. In Boise Towne Square, they have a Pro Image Sports store that is next door to a Boise State University only concept called The Blue & Orange Store that are among the top grossing stores in the country. In the same mall they have a Capz store that sells only headwear.

They have a longtime store in the Karcher Mall in nearby Nampa, ID that they revamped the look of in 2014, and opened a new store at a new center a few miles from Boise Towne Square called The Village at Meridian. It is an outdoor center concept new to the market. They also do a great job with e-commerce on both proimagesports.com and their own platform theblueandorangestore.com.

Their stores are well stocked and merchandised. Their customer service is legendary in their market. They do as good a job as any promoting their business through in-store events and through social media channels. If there is any possible angle to increase sales and market share, you better believe Hawkes and company are all over it.

Congratulations to them and many other Pro Image Sports franchisees that were recognized at the most recent convention for fantastic performances in 2014. 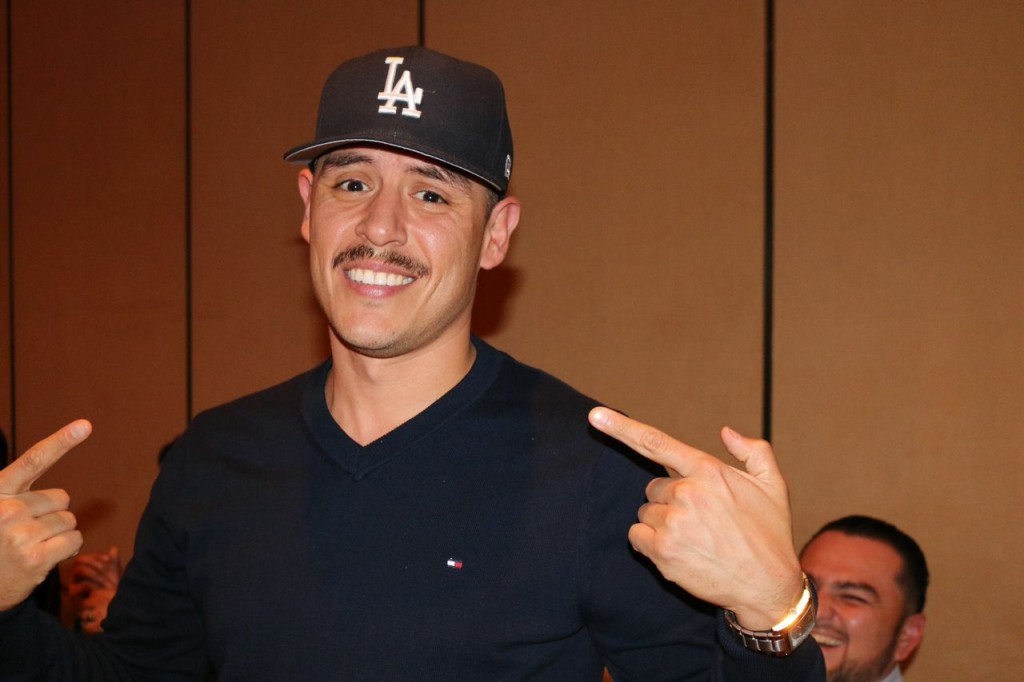 2015 Mustache of the Year winner Rick Velasquez of Los Angeles at the recent Pro Image Sports Convention.  Yes, we like to have a good time.

Want to get a taste of what a Pro Image Sports convention is all about? Take a moment to watch this video.