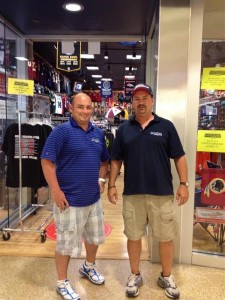 Like many business owners hoping to stay ahead of the curve, Dobbins, a 48-year-old Illinois native, pays close attention to his market and where it looks to be headed. For the world of sports apparel, it became evident several years ago that baseball, football, hockey and basketball jerseys and hats were gaining in popularity way off the court and far away from the bleachers. It’s become a style unto itself, complete with socks, pants, belts, wallets and whatever other accessory can hold a team logo.

Some customers totally drape themselves in one team’s uniform or colors. “They rock it from head to toe,” Dobbins said. “It’s like a walking billboard.”

When Dobbins was 5 years old, his father, Russ Dobbins, moved the family to Miami for a job and the future sports store owner fell in love with the Miami Dolphins.

“I grew up a sports fanatic. It’s actually been my childhood dream since I was 13 or 14 to own a sports store,” he said.

The Dobbins family moved to Florence in the late 1970s and Mark immersed himself in sports, playing basketball, football and baseball. He loved the thrill of competition and the athleticism involved in sports, especially baseball. After he graduated from West Florence High School in 1985, he first attended USC and then Francis Marion University, earning an accounting degree in 1991. While still in school at FMU, he met two guys who’d started a railroad construction business. They needed help with the business and financial aspects, and he soon found himself employed with Private Trackwork.

“It wasn’t a love for me, but financially it was good,” and suited his desire to be out in the field and not just the office, he said.

During this time, though, he continually researched franchise opportunities and how he might go into business for himself. When he came across Pro Image Sports, a lightbulb went off.

“I thought – this is a good match,” he said. “And it ended up being a really good match.”

“I was completely new to the industry with no experience,” he said. He threw himself into it.

Everything went pretty well for about 18 months.

“I had a nice little start, then thing’s got real squirrelly,” he said, as the Great Recession reared its head.

He thought the solution lay in seeking a higher volume of sales and he opened a second location in Myrtle Beach.

“It served its purpose during its time frame,” he said, but he saw the difficulty in keeping focus with two locations.

In January 2014, he closed that location down and focused his attention on his Florence store . Sales have taken off “through the roof,” he said, and he was honored in 2014 as being the most improved franchise. In 2015 he was honored as having the biggest uptick in sales from one year to the next – a 20 percent jump from 2014, he said.

“We bounced back beautiful. We have found our niche,” he said.

He’s quick to give credit to his manager of eight years, W.J. Ganes.

Though Ganes is a diehard Dallas Cowboys fan, he and Dobbins get along just fine and often find themselves immersed in conversation with regular customers about the sports world.

They’ve noticed there are four teams for which their regular customers – and everyone else, apparently – can’t get enough gear: the Cowboys, the Pittsburgh Steelers, the Washington Redskins, and of course the Carolina Panthers. During the lead-up to the Super Bowl, “a mountain” of Panthers merchandise was sold, Dobbins said.

“I feel blessed how things have taken off in the last few years,” he said. “But we’re going to keep pushing and bringing in new merchandise for our loyal customers.”