LEWISTON, ID- If you happen to find yourself in the panhandle of Idaho, and drop by the Lewiston Center you will undoubtedly find Mike Robertson in his Pro Image Sports store spittin’ sports with a customer in a personal way not commonly seen in mall retail.  Lewiston is a rural community equipped with all the charm and dressings of small town America.  Everyone may recognize you, but Robertson is the type that knows the names of everyone in your family tree.  It is that type of personal touch, and consistent work ethic that has contributed to his successful run as a Pro Image Sports owner.

A big congratulations to Robertson is in order, as he celebrates the 20th anniversary of his Pro Image Sports store this week.

His hair may be the only thing Robertson has lost in that time.  Everything else, from his sales and customer base to his family (He and wife Alicia have two daughters, Taylor age 21 and Kaitlyn age 18), have increased.  All of it is a result of his blueprint of hard work, customer service and detailed buying.

One of the challenges of operating in a smaller market is foot traffic is always a challenge.  As a result, Robertson rolls out the red carpet for every single customer that walks through the doors. 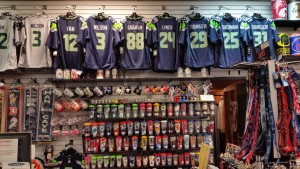 The recent success of the Seattle Seahawks has been a boon to business for Robertson over the past few years.

There are a number of business tactics Robertson has had to utilize because of the size of the market and mall he is in.  He consistently works in the store, and as a result, he knows the items customers are after.

“You need to work in your store so you know what is needed.  I can’t afford to turn anyone away,” he said.

With an accounting degree, Robertson has always been a selective buyer, seeking to offer as broad a team selection as possible, while still managing his inventory budget.  He is also one of the most patient operators in the Pro Image Sports family, and is not quick to slash prices on items that may be turning slower than anticipated.

Robertson says he will test out a new item in a few of his best selling teams, and if it performs well, he will go back to the well and write a refill order, expanding his selection of teams.

Some of the highlights of his career have come most recently as the Seattle Seahawks have appeared in the past two Super Bowls, winning one.

Maybe so, but what isn’t crazy is that someone that runs his business the right way, such as Robertson, has had such successful longevity. 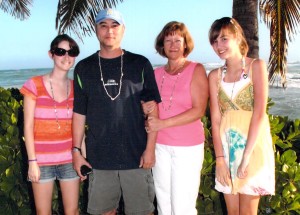 Mike on a family vacation with wife Alicia and daughters Kaitlyn (left) and Taylor (right).